Becky and Mike are finally getting married!

Becky and Mike had been together for four years and their parents were wondering what was taking them so long. Each family loved both of them and was patiently waiting for the day that they announced that they were going to get married. And they waited while they bought their first home. And they waited when they brought home the cutest Golden Retriever puppy in the world, Lily.

But Mike knew what he was doing all along. He was waiting until Becky had no idea what was coming. Their families all knew, he called them to tell them he was about to propose. Then, while sitting in their home with their loving dog by their side, Mike proposed.

Now I’ve written this all to sound like it was very romantic, which may not be exactly 100% true. The actual proposal went a little something like this: Mike threw something at Becky. She was a bit confused as to why he suddenly felt the urge to begin chucking things at her. She picked up what he had thrown and as it dawned on her what it was, he said very to the point, “So you wanna get married?”.

Now on the surface, it doesn’t look too romantic, but I assure you that Mike is definitely a closet romantic. The ring he had “given” to Becky was custom designed by him and made by the jeweller that Becky’s family has been using for years. Couple that with calling everyone to let them know they’d be stopping by to share their exciting news and folks, you have a romantic no matter how much they may protest this point!

The newly engaged couple then make the rounds at their families’ houses and by the time they reached Mike’s Parents’ house they had a cake waiting for them. Written on it was the simple word: “Finally!”.

I went to high school with Becky and am good friends with her younger sister. In all the years I have known her I have never seen her look so happy. She and Mike are such a perfect fit and you can definitely feel that when you are around them.

Their wedding is set for sometime in the spring of 2011 in some yet-determined tropical locale and I know that it will be a beautiful day, and a start to an already flourishing romance. 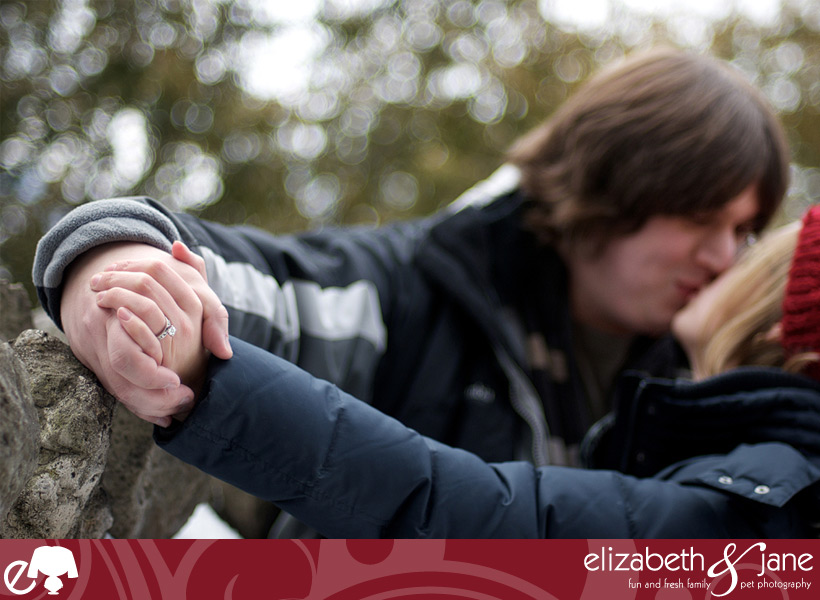 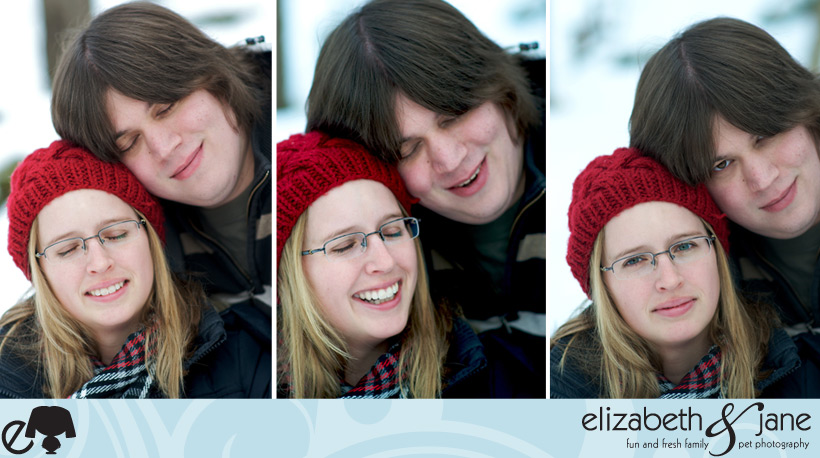 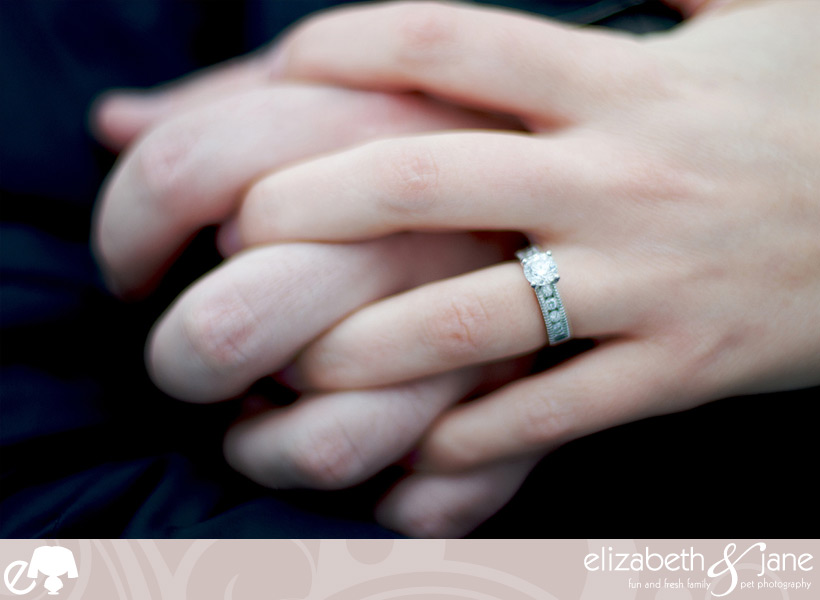 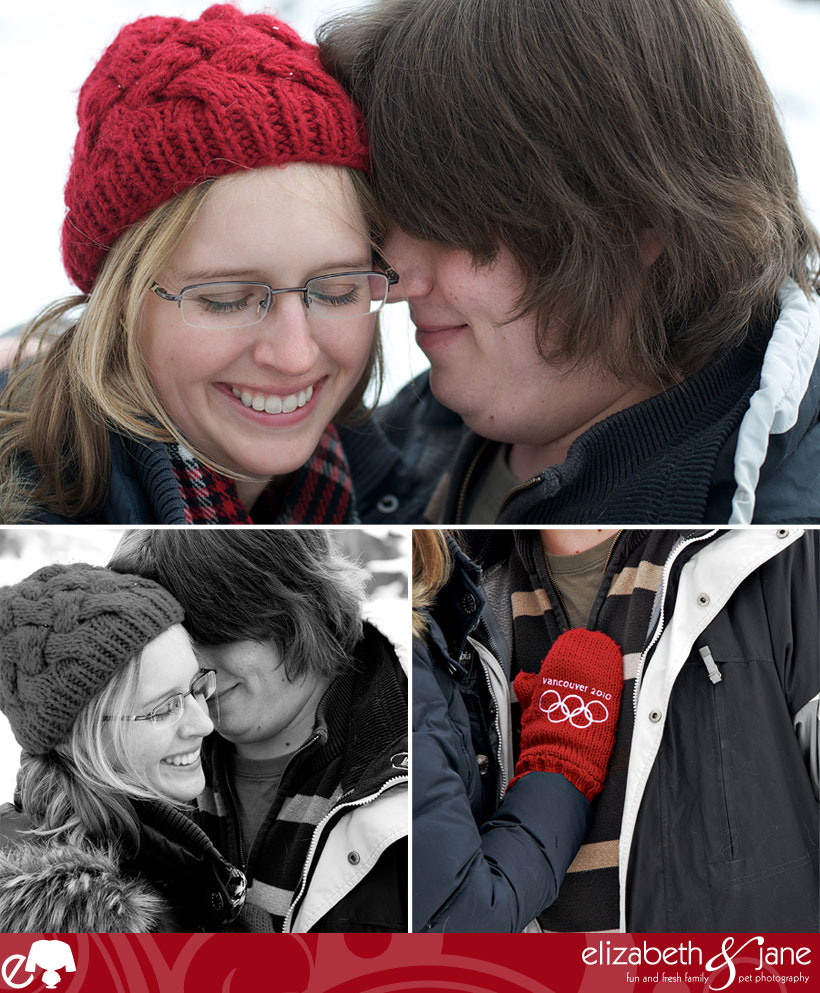 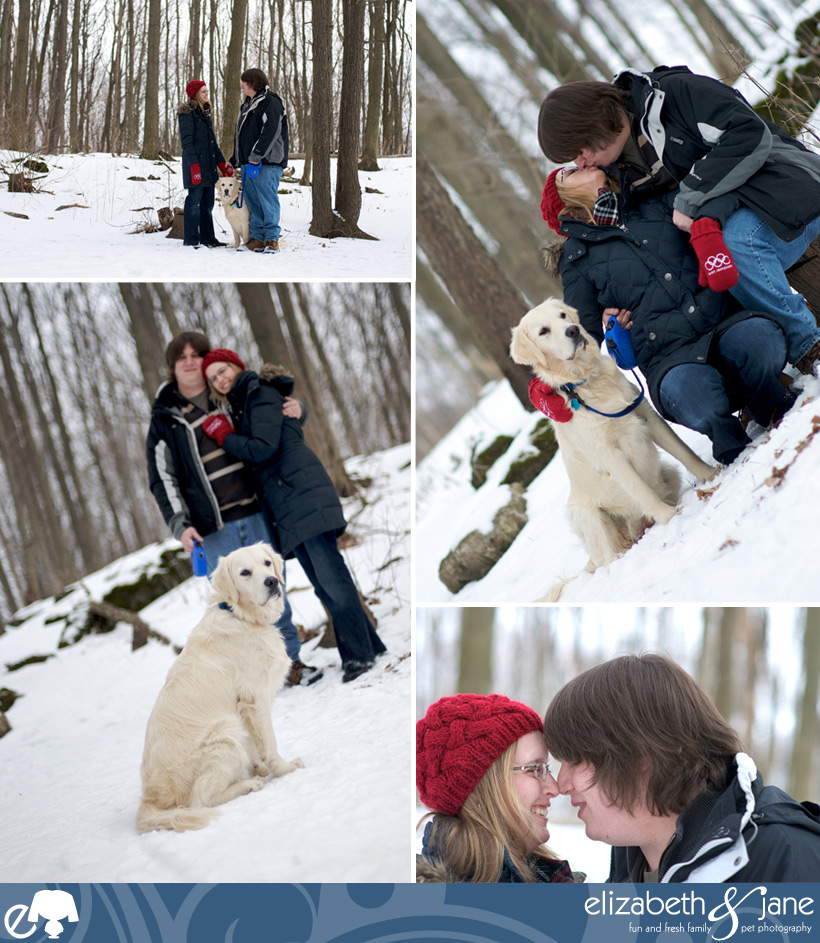 I like to call this one: Where is Lily? 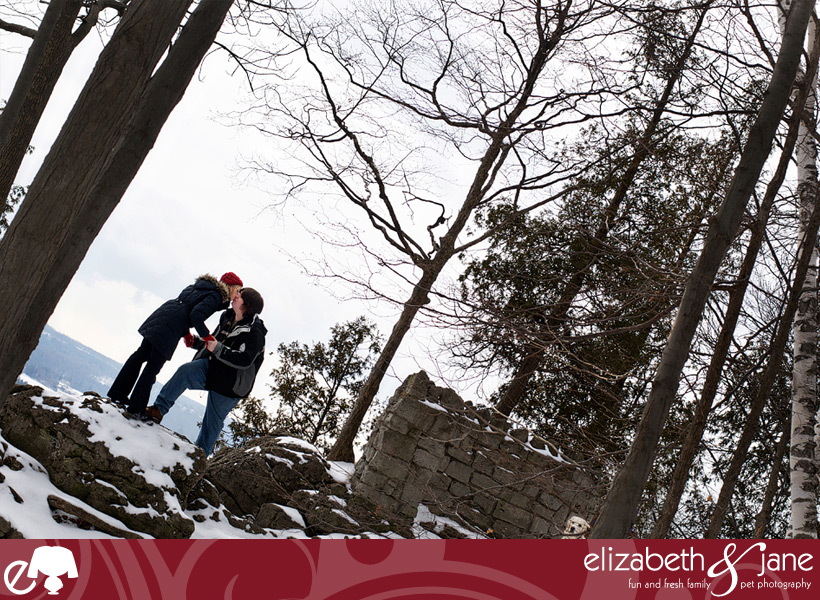 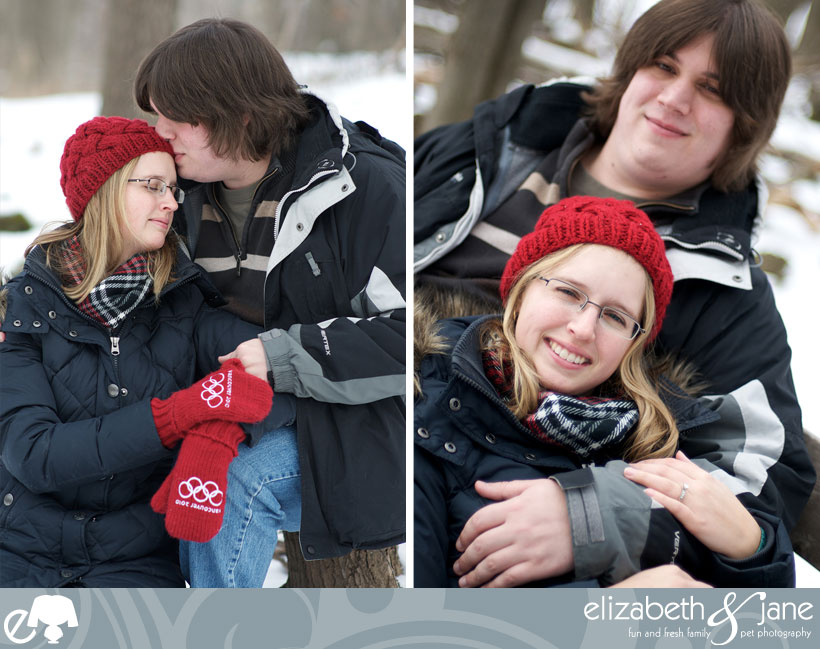 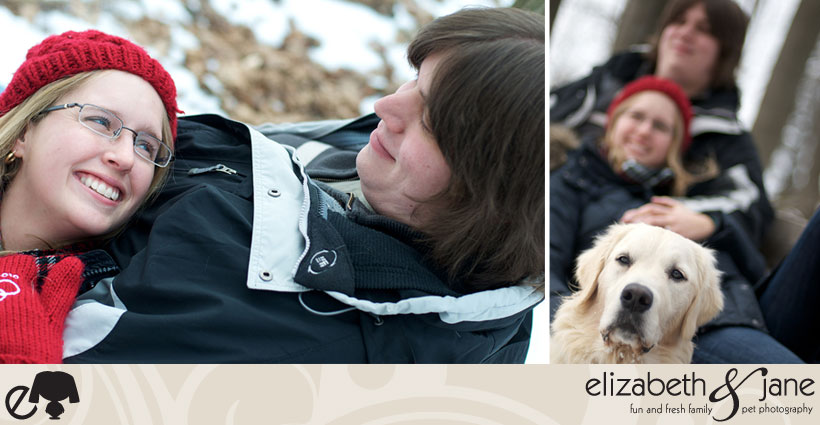 Becky and Mike have three fur-kids, Lily, the Golden Retriever and Big and New, the cats. 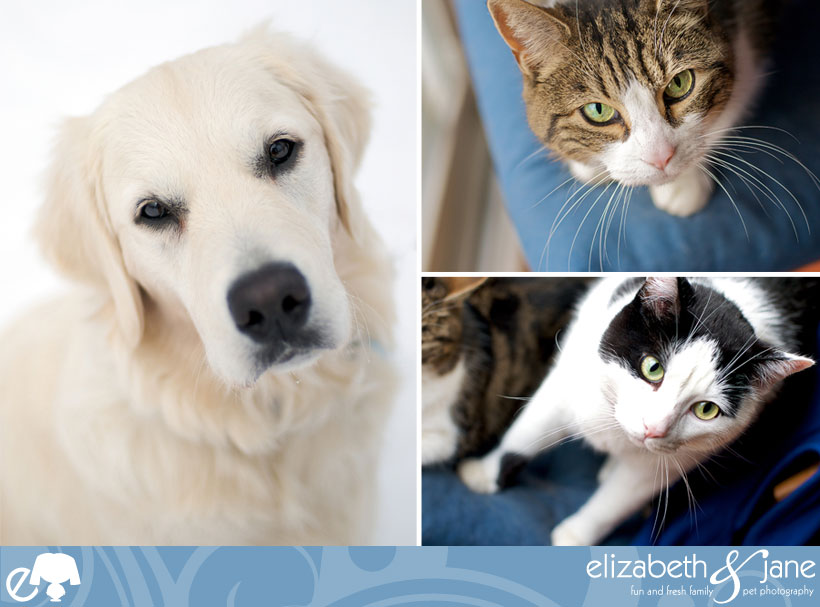 Lily’s trick to graduate from Dog Obedience School was to balance cheese on her paws without touching it. We used this talent to get a great shot of Becky’s engagement ring on Lily’s paw! Good dog Lily! (she got to eat some actual cheese after the shot!!) 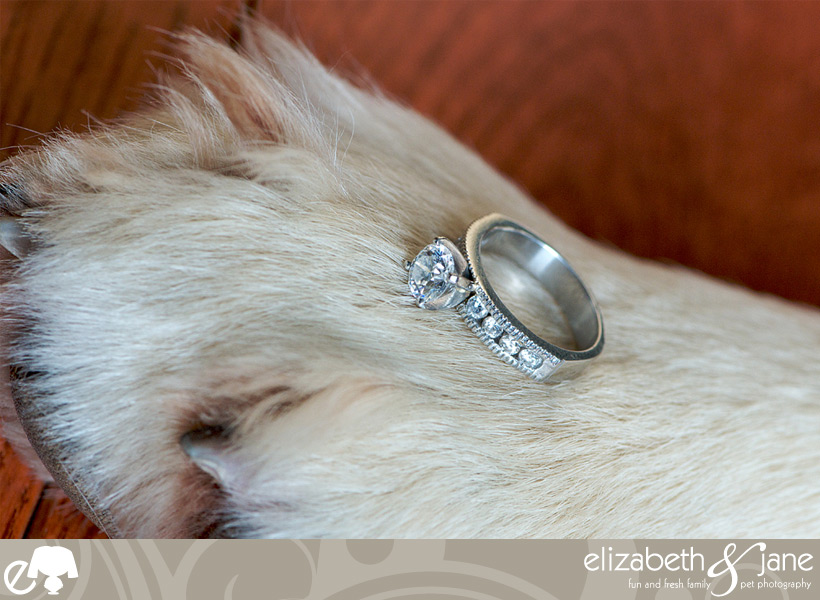 The location of the shoot was just stunning – check out the cliffs!

I really believe that Lily must have been a Mountain Goat in her previous life the way she scaled the cliff. She was a natural. 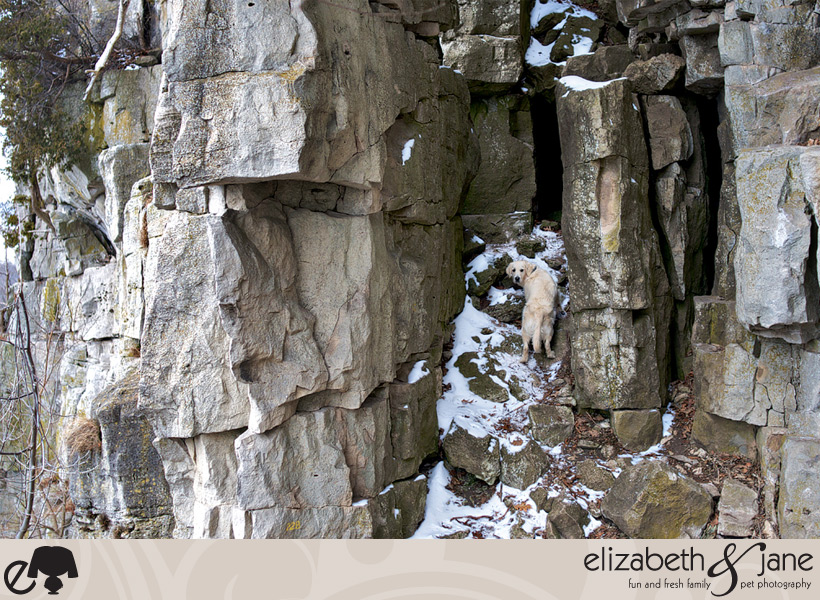 To Becky and Mike, thank you so much for asking me to come and document your love. Both Jane and I had such a great time with you!

Love the ring on the doggy paw shot! Now if only I could get our two mutts to be so well behaved. ;)

Sweet couple and what a cool story! Great session Liz! :)

Love them all Liz!